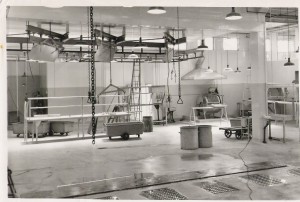 For over 80 years, San Antonio Packing Company has processed all of the Apco Brand Products. Our U.S.D.A. inspected plant is located on South Laredo Street in the heart of downtown San Antonio.

San Antonio Packing Company started its existence as Apache Packing Company in the late 1800s.  The company, founded by the Reyes family, was a humble two-person start-up business located on Apache Street in downtown San Antonio.  The focus of the company was beef, pork and goat slaughtering and processing.  The current facility at 1922 S. Laredo Street, just blocks from the original Apache St. location, became the further processing and packing facility producing sausages, cut meats, steaks, hams, bacon and chorizo.  The Laredo Street facility still produces many of the same great products including the coveted APCO Chorizo Especial.

San Antonio Packing Company was incorporated in the 1950’s and the signature “APCO” trademark, born of the original Apache Packing Co. name, was registered at about the same time.  The APCO Chorizo known in the early days as “Chorizo De Barrio” eventually earned the name “Chorizo De San Antonio.”

The Roe family purchased the business in 2008 and has carried on the long tradition of producing “The Real Chorizo” containing Pork with the hand blended recipe of seasonings that is the signature of APCO Chorizo.  APCO Chorizo Especial contains no cereal, water, salivary glands or other fillers found in many chorizo products.  The company strives to continue the long- proven, quality-driven practices that produce a superior product not impaired by introducing inferior ingredients.  There are several packaging options for the Especial including the traditional hand “string tied” casings that “The Real Chorizo Co” continues to utilize.  This “personal touch” process, lost in today’s manufacturing, showcases the pride taken by APCO employees as they produce their product.  APCO Chorizo Especial is the chorizo for the discerning consumer looking for the best overall value and quality for their chorizo choice.

Chorty Chorizo was born in 2008 and became so popular that his image was added to the packaging shortly after.